The Berlin Independent Film Festival is proud to host on of the Europe’s top screenplay competitions. Every February we recognize the best new screenwriters from around the world. With multiple prizes and screenwriter events at the festival, BIFF is a great chance to get your writing discovered.

NOTE: all screenplay submissions are preferred via FilmFreeway

The Berlin Independent Film Festival 2021 is dedicated to showcasing new emerging film talent. Our objective at BIFF is to recognize and support new and unrepresented screenwriters.

Submissions are scored on character development, story, dialogue, structure and originality. New in 2022, we will recognize semi-finalists in the following genre-specific categories: Feature screenplay, Sci Fi/Horror Screenplay, and Comedy Screenplay.

1. The 2022 Berlin Independent Film Festival is open to screenplays in one of the following categories:

1. Email a completed entry form with your screenplay (in .doc, .pdf. mms or fdr) to info@berlinfest.com
2. Screenplay cover should include title only.
3. Each screenplay must be submitted with a separate entry fee and form.

8. Payment must be made via FilmFreeway or PayPal

A. Screenplays must not have been previously produced.
B. If a winning screenplay has been written by two or more writers, one author should be the designated prime contact. Awards will be divided equally among the writers.
C. Screenplays must be in English.
D. Screenplays that have received awards from other competitions over $5000 will not be eligible.
E. Judges decisions are final. 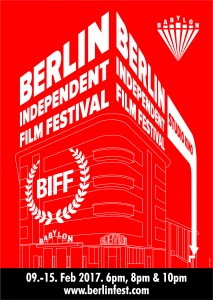